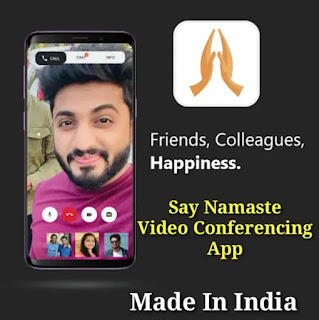 During the lockdown, video conferencing app Zoom has become quite popular worldwide including India. However, to compete with it, the native video calling app Say Namaste has come. Like Zoom, users can also make video calling from up to 50 people simultaneously through this app. Due to the problem related to security and privacy in the Zoom app, the Government of India also gave a salad of not using it. In such a situation, the Say Namaste app is being seen as an alternative to zoom.

What is special in Say Namaste app

This Indian video conferencing platform has been developed by Mumbai-based startup company Inscript. Previously available only in the web version, 'Say Namaste' has now come on Google Play Store and Apple App Store as well. This is special for those users who want to do video calling with more people simultaneously. Many features such as screen sharing, text mode, file sharing are available in this app. Through the screen sharing option, users can share the screen of their device with other users.

During video calls, users can also talk through text messages. At the same time, through the file sharing feature, users can send documents, PDFs, presentations, images and video files during the call itself.

Through this app, users can make secure audio and video calling. Anuj Garg, the company's CEO on privacy and security, said in an interview that the Say Namaste app has been designed in line with GDPR (General Data Protection Regulations).