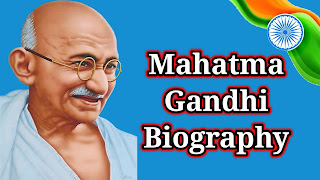 "You must not lose faith in humanity. Humanity is an ocean, if a few drops of the ocean are dirty, the whole ocean does not become dirty" - Mahatma Gandhi

Mahatma Gandhi's real name was Mohandas and his father's name was Karamchand Gandhi. That is why his full name was Mohandas Karam Chand Gandhi. He was born on 2 October 1869 in Porbandar, Gujarat. He has played a special role in getting the country's independence. Gandhiji always followed the path of truth and non-violence for freedom and made many movements. He died on 30 January from Nathuram Godse's bullet. Mahatma Gandhi, the father of the Indian freedom struggle, is the subject of study of people in India and abroad as well.

Let us study about 10 facts about Gandhiji :-

Shri Lal Bahadur Shastri ji, the Lal of the country, was also born on October 2, 1904 in an ordinary family in a township named Mughalsarai in Banaras district, taking birth in a very ordinary family and reaching the highest peak of progress with his firm loyalty, dedication, hard work and dedication. Beautifying the post of Prime Minister on the strength of courage, Shastri ji gave a new slogan to India when Pakistan invaded in 1965 - "Jai Jawan, Jai Kisan" and became a popular leader of the country. Shastri ji also emerged as the priest of peace and the winner of the war.

The birth anniversary of these two great men is on 2 October every year. Today the whole world looks at him with respect. These two men are the priests of non-violence, the inexhaustible inspiration of love, brotherhood, peace, harmony and fraternity, these declarations of inspiration for the establishment of Ram Rajya in India for the welfare of mankind. Will always remain as a guide. Although today these two great men are not sitting among us Indians. Nevertheless, his policies, the spirit of universal brotherhood and ideals will always guide us. Today, on the auspicious occasion of October 2, let us all take a firm resolve to follow and follow the path shown by such great men so that our India can reach the highest peak of progress and be successful in establishing peace in the world and playing the role of a hero for human welfare. With these good wishes!